Another year has past and that means I had to make something new for Dragon Con.  I was asked to make a Faye Valentine costume for my girlfriend after watching Cowboy Bebop with here.  This commitment was made 2 weeks before we had to leave so I had very little time to learn all of the necissary skills.  I got in a bit over my head but overall I am fairly happy with how this costume came out.  This article is mostly a reference to the accomplished work.  I had so little time to learn to sew, modify patterns, and make the costume that didn't document or record much during the build process. 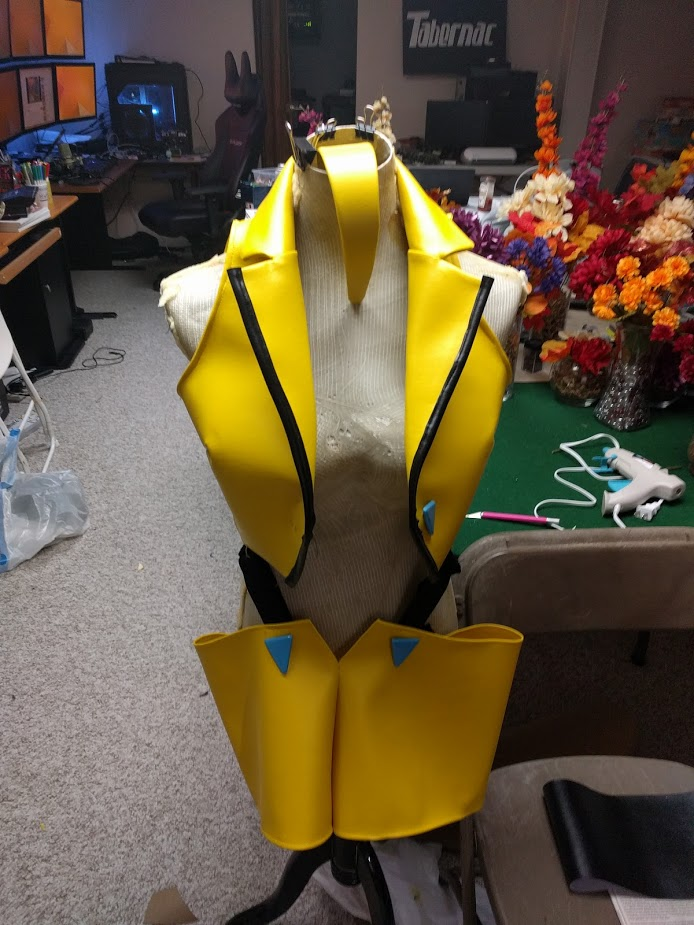 I started by collecting as many refrences as I could for this costume. 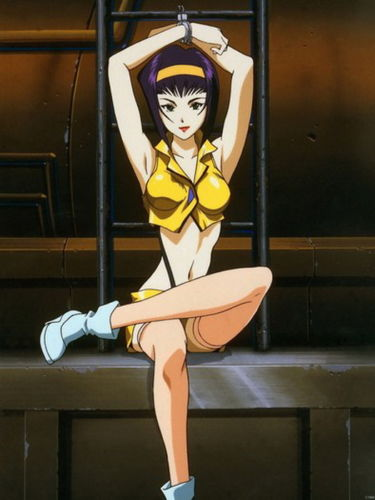 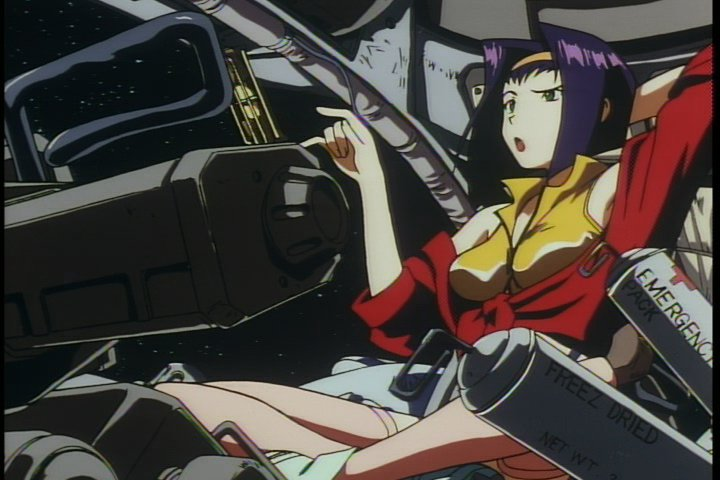 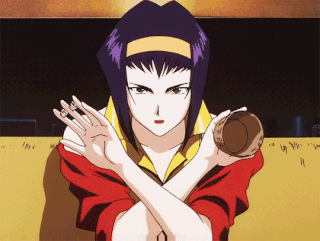 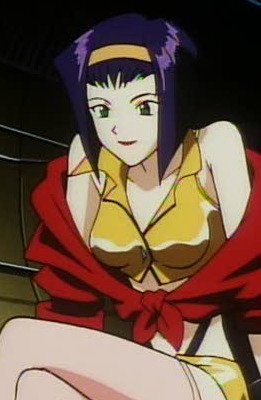 Most of the work was based off of existing patterns in some way but at the end of the day I had to alter the patterns a lot to get the fit we where looking for.

Between my girlfreind and myself I think we ordered every female blouse and suit jacket pattern you could find.  after comparing through them and watching many videos on sewing mens suit jackets I ended up creating patterns from using the originals as refrences.  I then used muslin fabric purchased in bulk to quickly sew up a test peice; more measurements would be taken from the test peice and the pattern would be adjusted again.

Once the pattern was set it was recreated out of the pleather, a type of marine vynil.  It was not the best fabric for this but it did have a proper leather texture.  It would have been nice if we could have gotten something that was a bit thinner but with the 2 week time constraint I think it worked out well.

The black trim was cut from a black pleather I had from book binding experements cut into a thin strip.  The strip was ironed to keep the fold prior to sewing and then "pinned" on with a shit load of binder clips.

The shorts turned out to be simple, we purchased a simple pants pattern and cut the legs off.  Made the "shorts" out of muslin and just started pinning and tieing in until it fit how we wanted it to, this was mostly additional shortening and slimming.  Once we where close I just made the shorts out of the marine vynil and continued to trim it in until we where ready for the seamles zipper.  There was nothing complex abou the shorts or at least it seemed that way after making the jacket.

This was my favorite part.  The suspenders are fully functional to the best way that I coud imagine they would work.  They where made to be adjustable and had the triglides hidden under the jacket.  Simple design using elastic, D rings, triglides and nylon webbing.  I learned how to sew a proper box stitch and probably made the webbing overkill for what it was doing.  This was also one of the easier parts.

Once I had the shorts, suspenders and the jacket made we just put them on and pinned everything into the right place.  Put them back on the sewing machine and stitch them in ot the innner layers of fabric. 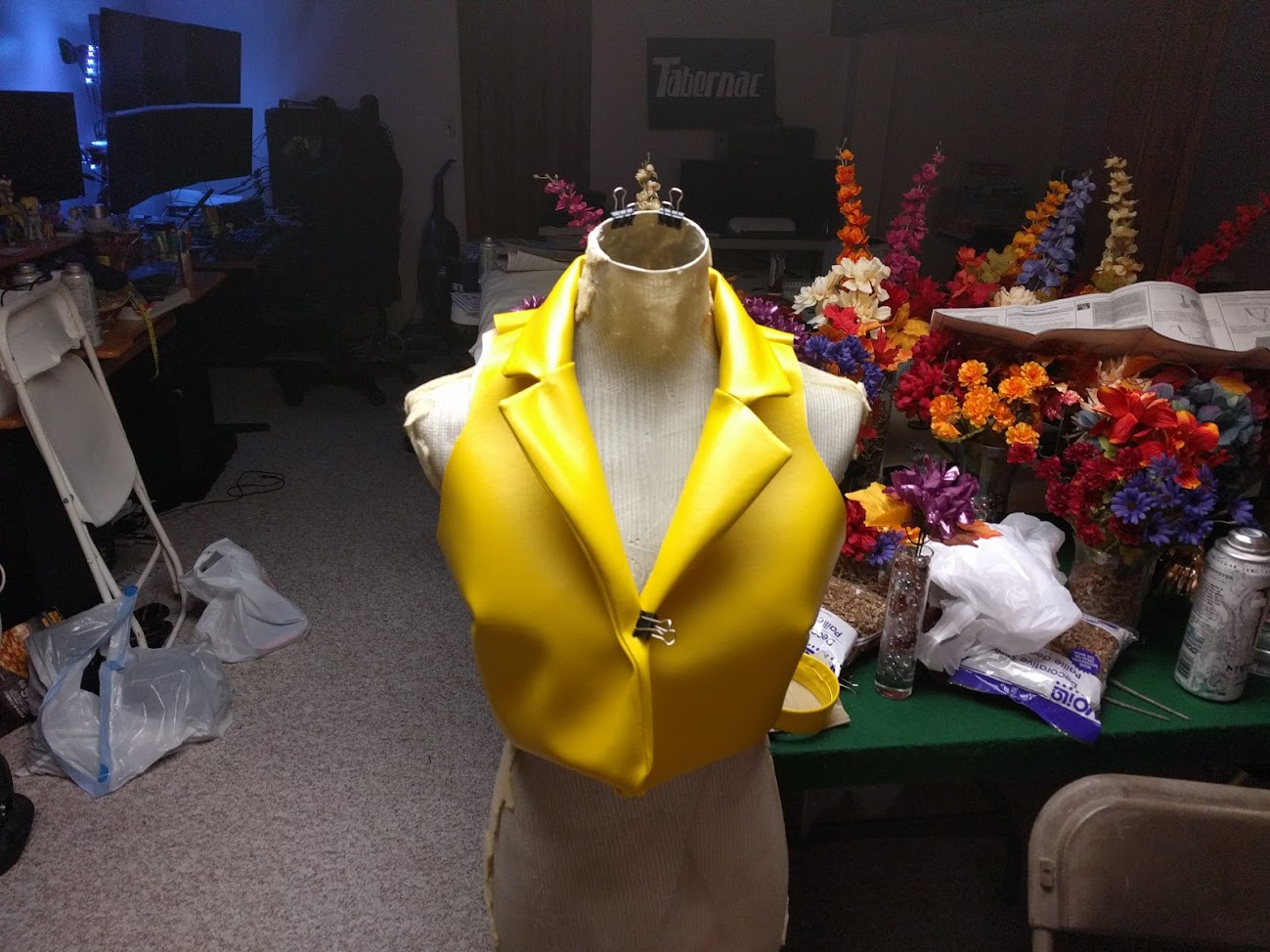 Pictures at the Con